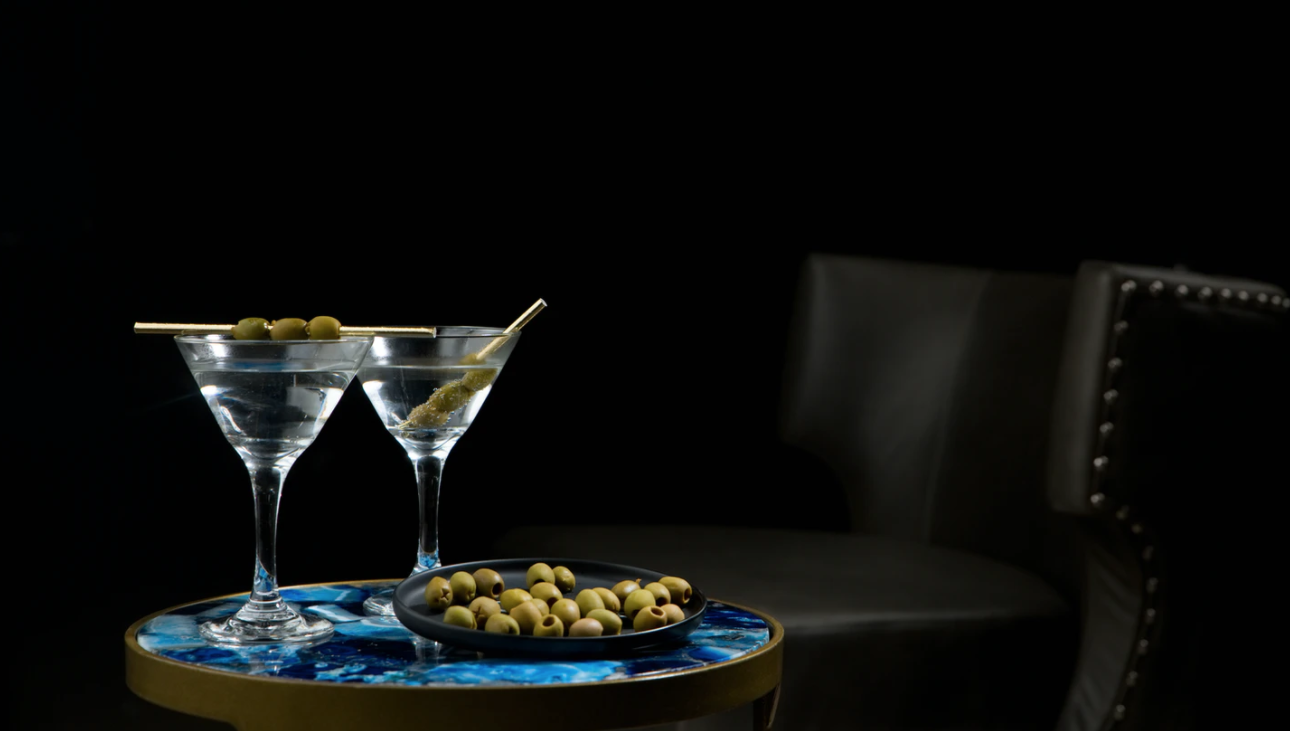 3 Different Ways To Enjoy A Martini

Have you ever tried something so delicious that you suddenly can’t get enough? We’ve been lucky enough to have such an encounter with a strikingly memorable Martini. It turns out we’re not the only ones hooked on this classy cocktail. Back in the 1920s, the famous journalist H.L. Mencken had called the Martini, “The only American invention as perfect as the sonnet.” Charlotte’s Webb author E.B. White described the drink as “The elixir of quietude.”

To express our admiration and inspiration, we set out to craft a few variations on this classic so you can explore your love for this beautifully simple cocktail any time of the day you choose. Read on to discover a martini for each meal; breakfast, lunch, and dinner.

But, before we share some different ways to enjoy a Martini, let’s take a quick trip back in time and discover the cocktail’s shadowy beginnings. As with most of the classics, the Martini has a controversial past with multiple potential origin myths. Perhaps the most popular one tells how the Martini evolved from another classic favorite, the Martinez, in the late 19th century.

In this version of the story, we head back in time to a little town called Martinez, California. In the late 1800s, there was a bartender by the name of Julio Richelieu. According to a simple plaque posted at the corner of Masonic and Alhambra Ave in the town of Martinez, Julio created the drink on the spot for a miner looking to pay for his drink with a fistful of gold nuggets. The drink was called the Martinez, but after 2 or 3 of them, the pronunciation changes, as the tongue loses the ability to pronounce ‘z’s, and thus, Martinez becomes Martini. 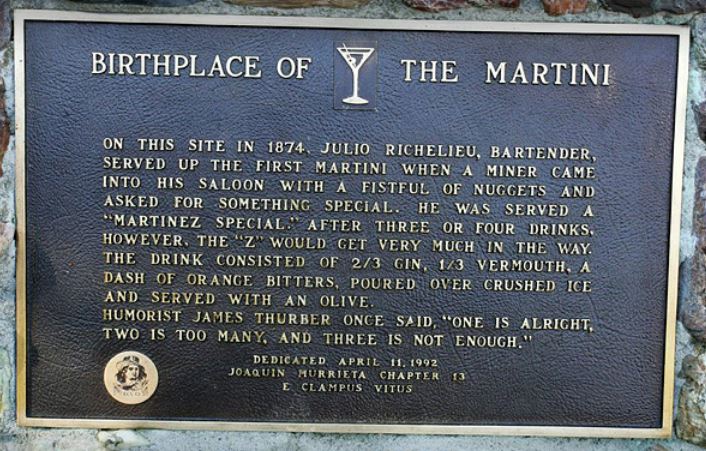 Or instead, we look west, this time to San Francisco. Another city, another story, but like the variations on martini recipes, the core elements remain the same, but we change the mixers and the garnish. We still have a bartender, but this time by the name of Jerry Thomas. The thirsty miner is back again, ready to pay with a handful of gold. Jerry calls his drink the Martinez, a name chosen on the spot. History is best written down, and Jerry cements his historic claim to fame by being the very first to publish the Martinez recipe in the late 1800s. In his book “Bartender’s Guide, How to Mix All Kinds of Plain and Fancy Drinks,” his recipe for Martinez has similar components to a Martini: Old Tom gin, sweet vermouth, and Boker’s bitters.

They say this codified cocktail was the inspiration for the Martini.

But that’s a different drink! Regardless of the Martinez recipe’s origins, the first written recipe for the Martini is in O.H. Bryson’s 1884 cocktail book “The Modern Bartender.” Some say the drink is based on the Manhattan, and not the Martinez after all. Others say the Martini and the Manhattan were contemporaries, but have nothing to do with each other.

Towards the end of the 19th century, many similar cocktails started appearing in numerous bartending guides. It wasn’t until the mid-20th century, however, that the cocktail became enormously popular. With endorsements from celebrities and fictional characters in films (yeah, we’re talking about James Bond), the cocktail has become a staple in nearly any bar. It has become so popular that the glassware used to serve the concoction is now forever known as the Martini glass.

The ratio of gin to vermouth has changed over time. Generally, it’s 2:1 with the optional addition of aromatic bitters. However, we’ve found several ways you can enjoy it any time of the day, every day. Be warned, drink moderately and responsibly.

If you’re looking for gin, head on to our Shop to check out the different bundles we have put together for you! Perfect for staying in and enjoying Martinis all day long!

Martini in the Morning

Looking for a remarkable way to celebrate a week finally finished? Start the weekend with a breakfast martini!  The right recipe can help the Martini shake off its refined evening wear and greet the morning in a relaxed tropical style.

Combine all ingredients into a cocktail shaker with ice. Shake to chill and combine. Double (fine) strain into a coupe glass.

Add all ingredients into a shaker with ice and shake. Fine strain into a chilled coupe glass. Shave some dark chocolate on top. Enjoy with more chocolate on the side

No room for dessert? Perhaps a drink instead. We can easily forgo dessert and indulge in this cocktail. We love this with some dark chocolate on the side. A great afternoon pick-me-up!

martini in the evenings

Let’s keep the evenings classy, even in pajamas. But after a long day, your drink needs to be simple. For those who lean more traditional, go for the classic straight-up, or, for those who crave a saltier bite, try the dirty.

Add all ingredients into a mixing glass with ice and stir until chilled. Strain into a chilled martini glass. Garnish with an orange twist or olive

In a mixing glass filled with ice, pour Paper Lantern Gin, dry vermouth, and olive juice. Stir well, for at least 30 seconds. Strain into a chilled cocktail glass. Garnish with one or three olives.

At the heart of it all is rice. Sourced regionally, this incredible grain is the canvas on which we build our gin. The rice harvested is distilled into the base spirit that renders its smooth base and silky finish.
.
.
.
#drinkpaperlantern #paperlanterngin #vietnamesegin #instagin ...

We love nothing more than experimenting with local flavours and ingredients. ⁠
⁠
Tap on the link in bio to discover 5 new recipes that feature Asian ingredients!⁠
⁠
And don't worry, even if you're in Europe or in the UK - most of the ingredients are easy to come by.⁠
⁠
Hoan Ho! ⁠
(cheers in Vietnamese) ...

Punch: borrowed from Sanskrit, it refers to the number of original ingredients (five) in the cocktail: alcohol, sugar, lemon, water, and tea or spices. While it's expected to have a lower alcohol content than a typical cocktail, some recipes have a real kick to it.

#cocktails #cocktailrecipes #craftcocktails Punch: borrowed from Sanskrit, it refers to the number of original ingredients (five) in the cocktail: alcohol, sugar, lemon, water, and tea or spices. While it's expected to have a lower alcohol content than a typical cocktail, some recipes have a real kick to it.

RED LANTERN
5ml Paper Lantern Gin
20ml TWG Tea Red Christmas Tea syrup*
20ml fresh lemon juice
30ml champagne/sparkling wine
1. Add all the ingredients except for the champagne/sparkling wine to a shaker with ice and shake.
2. Fine strain into a chilled glass. Top up with champagne or sparkling wine.
3. Garnish with rosemary.
**TWG Tea Red Christmas Syrup
1. Add 200 ml of hot water to 10 grams of tea.
2. Let sit for 15 minutes.
3. Strain tea and add equal amounts of sugar (200 grams) to tea.
4. Stir until dissolved. The syrup will be good for up to 4 weeks in the refrigerator.
More recipes with @drinkpaperlantern Gin at https://drinkpaperlantern.com/recipes/

In a cocktail shaker filled with ice, combine Paper Lantern Gin, sugar syrup and lemon juice. Shake vigorously, then strain into a glass filled with crushed ice. Top with the berry purée and garnish with berries, to serve.

*For the berry purée:
In a blender, blitz mixed berries, lemon juice and a few teaspoons of sugar (to taste) until liquefied.

Considered as the "Father of the Martini", try our take on the classic Martinez cocktail to cap off this week:

Add all the ingredients into a tall ice-filled glass or cocktail mixer. Stir gently to prevent over dilution. Fine strain into a chilled glass. Garnish with a lemon twist.

We love the burnt honey color of this well-balanced drink. A true classic. Cheers! 🍸

Celebrate the weekend with a great afternoon pick-me-up cocktail. We can easily forgo dessert and indulge in this cocktail. We love this with some dark chocolate on the side. 🍫

Cheers to the weekend! 🍸

Negroni, a classic cocktail that has evolved so much over the years. Enjoy it classic or with a twist. In celebration of Negroni Week, here's our modern take on this iconic drink:

Add 45 ml of Paper Lantern Gin and 1.5 teaspoons of tea into a jar. Insert jar into a bowl of boiling hot water and let it steep for 15 minutes. Strain the infused Paper Lantern Gin and tea mixture into a mixing glass or straight to your preferred rock glass. Add Campari, Sweet Vermouth, and ice. Stir 15 times to prevent dilution. Garnish with orange peel.

Cheers to the weekend! 🎊

We are thrilled to be a part of one of UK's biggest drinks events this year! Catch us at @imbibeuk 2021 today and tomorrow! Thank you @oakandstill for bringing Paper Lantern Gin to this event. We will be in stand 7C114. Come by and say hi. Cheers!

Why Paper Lantern Distilling? Paper lanterns mark the beginning of a new chapter, bringing people together to celebrate. Just like our spirits, best enjoyed with friends and family.

This cocktail was originally concocted for Chinese New Year but this year all the seasons are out of sync so here we go!

A twist on the French 75, one of our favourite cocktails! This time, we're adding some Earl Grey Tea from @amuseprojects into the shaker. You'll taste the difference.

Add 45 ml of gin and 1.5 teaspoons of tea into a jar. Insert jar into a bowl of boiling hot water and let steep for 15 minutes
Strain the infused gin and tea mixture into a cocktail shaker.
Add simple syrup and lemon juice into a cocktail shaker filled with ice.
Shake well and strain into a champagne flute
Top up with Prosecco/Champagne
Garnish with lemon peel

PS: We're hosting a cocktail making workshop with @expatlivingsg on August 5th. Have you already signed up?

This delicious cocktail is perfect for tea time. We recommend using @amuseprojects hand blended tea which is made in Singapore and available with our Paper Lantern Gin in a gift set, too.

Add 60ml of gin and 1.5 teaspoons of tea into a jar. Insert jar into a bowl of boiling hot water and let steep for 15 minutes
Add raspberries, lime wedges and simple syrup into the cocktail shaker and muddle
Strain the infused gin and tea mixture into a cocktail shaker then add ice
Shake and strain into a rocks glass filled with ice

Save this recipe for later! We just finished shipping out all the orders that came over the weekend - thank you guys for your endless support and encouragement.

A cooling gin cocktail recipe, which is just what we need to avoid losing our cool with restrictions round #4952 here in Singapore!

*Combine 1 cup sugar and 1 cup water, heat in a saucepan over medium heat. Stir until sugar is dissolved. Do not boil. Cool, transfer syrup to a bottle/jar. The syrup can be refrigerated for up to a month. ...

All orders received between Nov 20 - Dec 31 will be fulfilled in January 2022. Please head to Amazon.sg for urgent orders. Dismiss